Celebrity Chef Chauhan At The Loren 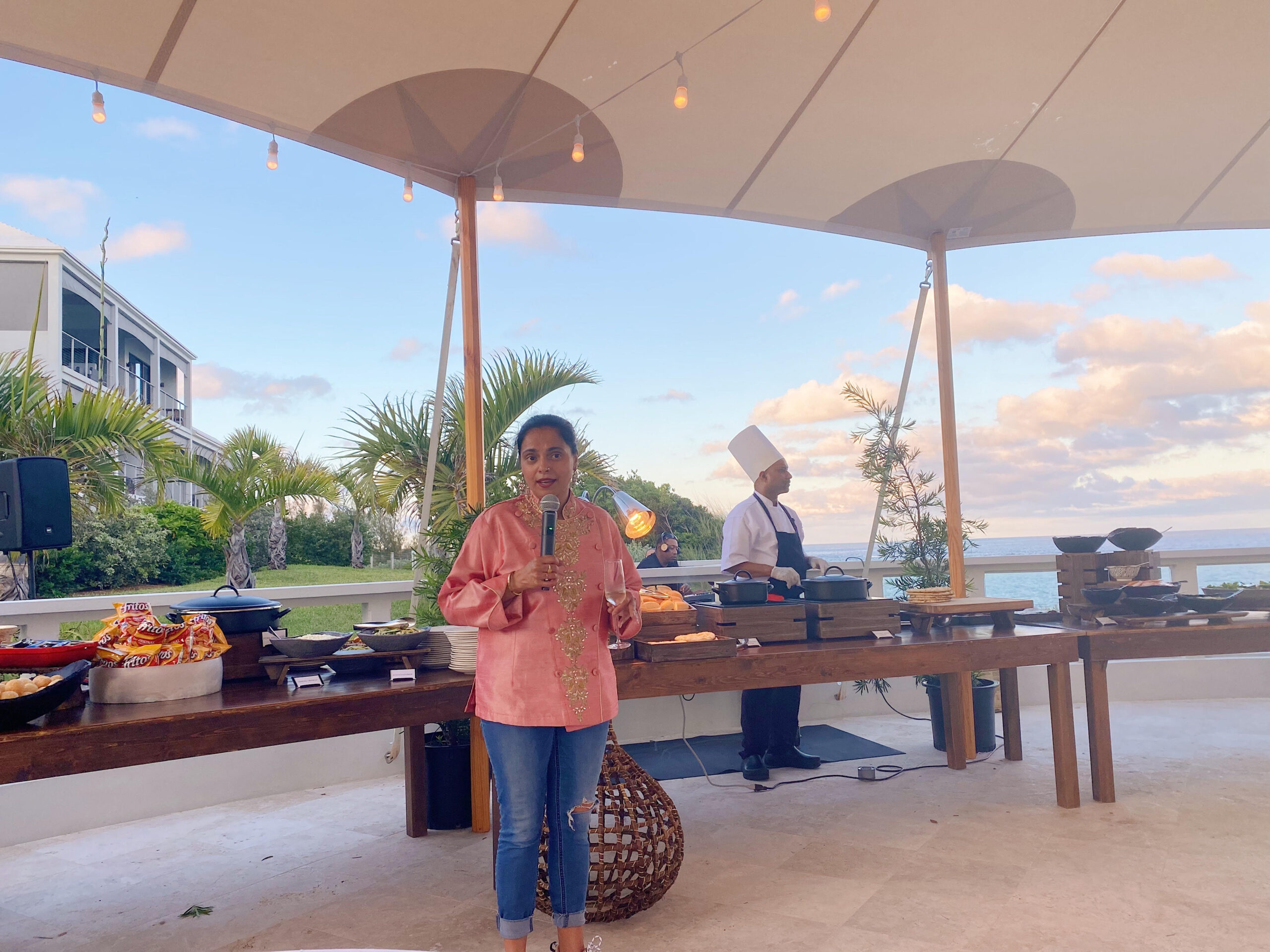 Over the weekend, I got invited to a very special dinner curated by a celebrity chef in a gorgeous location.

The chef was Maneet Chauhan, an award-winning chef, media personality, author, and judge of Food Network’s popular completion show Chopped. And the venue, The Disk at The Loren for the summer guest chef series.

The menu was a 4th of July Indian street food barbecue, something I’ve had yet to experience so I couldn’t say no. And because I adore Indian food, I knew it would be good but I wasn’t prepared for just how good.

When I arrived with my guest, we were offered either a glass of Prosecco or a juice box with different flavours of sangria. I chose bubbles and my guest chose the juice box.

The setting was perfect as it was a gorgeous night and dinner was being held overlooking the South Shore on a particularly gorgeous evening. Once Chef Maneet was introduced, she explained the menu and encouraged us to eat as much as possible. She didn’t have to tell me twice!

The first thing I sampled was Pani Puri, which is a popular Indian street food made of a hollow puri [deep fried crisp flatbread] then filled with a pani [a mixture flavoured water, potatoes, chickpeas, chutney, etc]. This one was elevated with caviar.

I had no idea what to expect when I ate the Pani Puri because I’d never seen it before. One bite and I was heaven! It was crunchy even though there was a broth inside and the flavors of cilantro and mint were out of this world. I really should’ve eaten more.

Next up was Frito Walking Tacos, a common dish in the south that Chef Maneet turned into an Indian snack. This version was a frito chip bag base topped with pork vindaloo, tamarind chutney, koochumbar, [like a pico de gallo] and queso fresco.

It sounded amazing but we don’t eat pork so I thought I would miss out. I mentioned this to Chef Maneet when she was dishing up the Walking Taco and she told me to give her a few minutes and she would make something for us. True to her word, a few minutes later she came over to our table with two veggie versions. Instead of the pork, she topped ours with a mix of beans, potato and chutney.

Now, I obviously can’t say what the pork version tasted like, but our version was pretty good. Salty from the chips, savoury from the potatoes and beans, creamy from the cheese and them a refreshing bite from the koochumbar. I would happily eat this dish again and again.

Now for the rest – I enjoyed delectable lobster rolls, one with Lemon Butter Lobster and the other with Coconut Moilee Lobster. I also enjoyed Chicken Malai Dogs [so good I had two], Saag Paneer Mac and Cheese [oh my god], Cauliflower Steaks, Cumin Potato Salad and more.

I know all of this sounds incredible because it truly was. But, the best thing I ate all night was Banana Leaf Wrapped Patrani Maachali. I’ve never heard of this dish so I had no clue what to expect. What I got was a perfectly cooked piece of salmon topped with the most flavourful, bright, fresh green chutney. The chutney is typically made with coconut, green chillies, coriander, garlic and mint. It was easily the best dish I’ve eaten in a really long time.

And if I can be honest, I eat out at events all the time. I’ve never once been tempted to ask to take home food from the buffet. This was the ONE time I really, really wanted to ask for a takeout box filled with Patrani Maachali. It truly was that delicious.

Dessert included Mango Lychee Mousse, an Indian Cupcake Tower with Saffron Cardamom and Garam Masala Chocolate and Gulab Jamun Cheesecake. It was all decadent but the cheesecake was the clear winner.

Overall, this dinner was truly special thanks to Chef Maneet’a amazing personality and her incredible food. The next guest chef is Chef Dan Kluger starting on July 15. For more information, visit www.thelorenhotel.com.