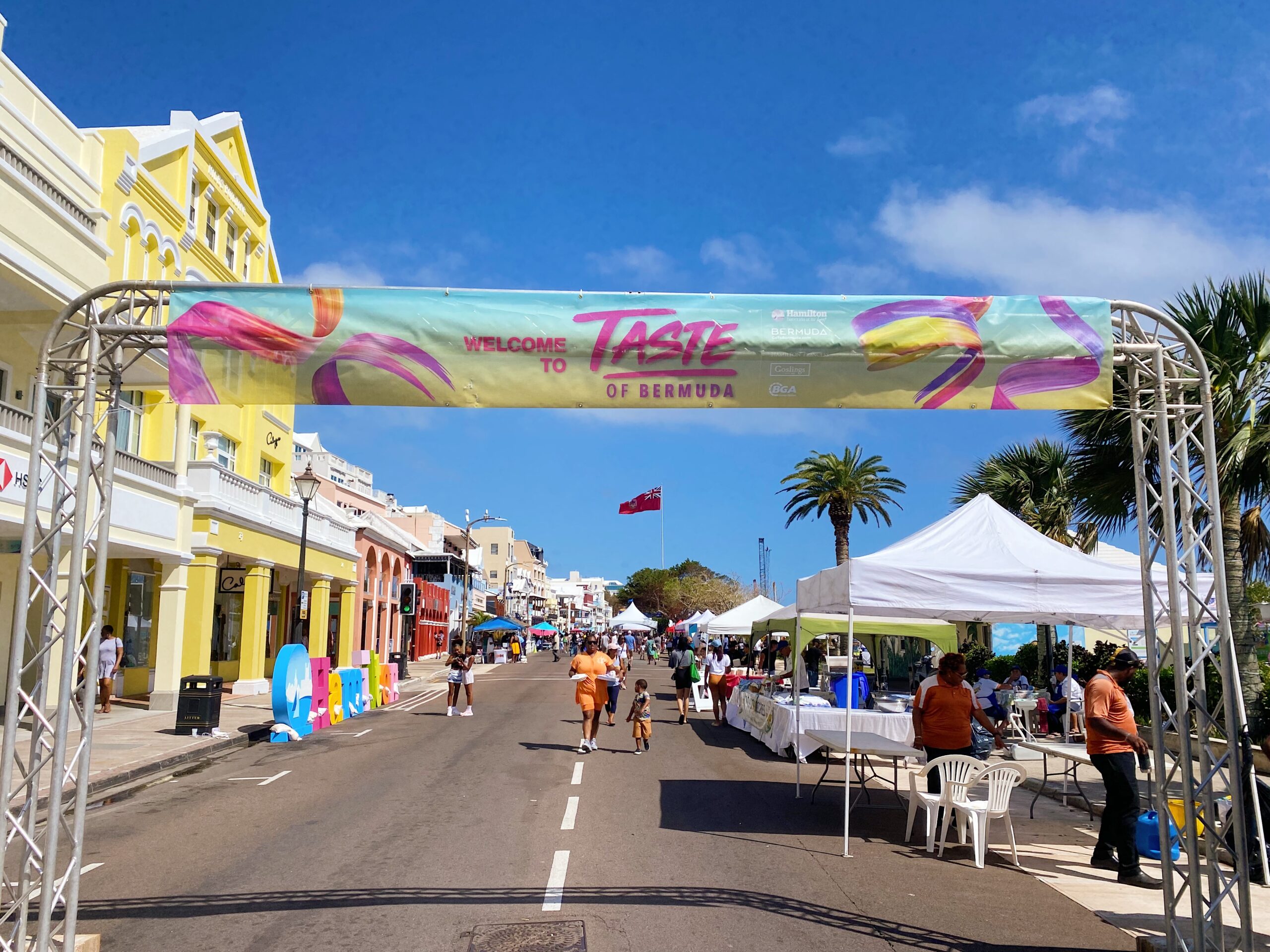 Food lovers in Bermuda were in for a treat over the weekend as the City of Hamilton hosted Taste of Bermuda with three different events.

The three-day event kicked off on Friday evening with the Set The Bar: Cocktail Competition at the Bacardi HQ. When I arrived, I was given two drink tickets to enjoy myself during the two-hour event. There were also going to be samples of the five competitors’ offerings.

The first bar was offering a St. Germain Spritz, which was light and refreshing for a hot evening. DJ Chubb was spinning tunes while we waited for the event to begin. And then it was time.

Hosts Vernon Pemberton aka The Bacardi Guy and Laurel Burns welcomed everyone to the event and then got the competition going. The mixologists include Dae Payner, Janico Burrows, Stefan Dill, Kierston Samuels and Matt Francis.

Each drink was created with liquor from Bacardi’s vast portfolio and the competitors were given just a few minutes to explain, make and serve their creation. The drinks were all very different but had one thing in common – brown/orange hues, which honestly was a bit strange.

Saturday night saw Front Street Formal, an all-white dinner with a log table snaking down Front Street. Unfortunately, I wasn’t able to secure tickets for this so I didn’t attend. But, I did go to the Tasting Village on Sunday.

The Tasting Village promised lots of food vendors, cooking demos, cocktails and entertainment and it honestly didn’t disappoint. It was insanely hot, but it was a gorgeous day for a food festival.

I arrived with tokens in hand ready to sample as many things as I could. But I will say, things were confusing from the get go. The tokens were in $6 and $3 denominations, which made many people, myself included, believe that’s what items would cost.

While some items were as inexpensive at $3, most were priced at higher than $6. Additionally,  many stalls had large plates instead of the small sample type items. I think this should be revised for next year.

The first vendor I went to was The Cloud for Jamaican Lobster Patties and Miso Short Rib Sliders. At $12 and $9, these items were pricey but ridiculously good. I literally told everyone I saw to go grab a lobster pattie.

I also watched the cooking demos with Food Network Celebrity Chef Anne Burrell and later on, Chef Antwan Ellis of Intrepid at Hamilton Princess. Watching Chef Antwan meant I got to sample his dish – Seared Beef Tenderloin with Pureed Potatoes and a Red Wine Sauce. It was to die for.

I also enjoyed a variety of cocktail samples from Gosling’s, who had a large offering of specialty cocktails for this event. Because their tent was right next to the harbour, the breeze was beautiful. The area was set beautifully with cocktail tables and bar stools for those who wanted to indulge in libations.

For dessert, I went to Mix & Roll for a delicious made-fresh ice cream roll. It was a great way to try to beat the heat.

Because lines for tokens were long and it was hot, I didn’t sample much more. I would definitely recommend organizers have at least two areas for people to purchase tokens or forgo them for next year. I’m sure many vendors lost money because people just didn’t want to wait in line to get tokens and cash wasn’t being accepted.

Overall, I had a great time and look forward to next year. Hopefully I can snag tickets for the formal event as well.

Did you attend any of the Taste of Bermuda events?! Let me know in the comments!

I‘m Mikaela, an island girl who’s obsessed with finding the best eats and drinks in Bermuda and beyond. If you love all things food and wine, click here to join my email list to get awesome recommendations.